Lesley Warren relived memories of the film An Officer and a Gentleman at the musical adaptation, performed at The Bristol Hippodrome…

The 1982 Academy Award winning film An Officer and a Gentleman starring a handsome Richard Gere in his iconic white uniform and offering an excitingly thrilling uplift of a finale to thousands of viewers is a hard act to follow.

The Bristol Hippodrome was packed with an audience of all adult ages and I imagine everyone over 45 had seen and loved the film when it was first released and, like me, was keen to judge this musical against it.

This musical production stays loyal to the original film, within the constraints of a theatre stage, with the caveat that the characters now express their innermost thoughts and angst through the medium of an assortment of recognisable 80’s megahits.

A working-class story of American values, this story follows a group of raw recruits throughout their 12-week training course at a US naval training college. A moody, broody Zach Mayo (a great performance by Jonny Fines), a bad boy from a nomadic youth where he found his mother dead from suicide and his father (played convincingly by Daren Bennet) is a bully of a womanising alcoholic, first appears on stage stylishly scruffy and sexy in his leathers on a motorbike. James Dean, eat your heart out.

Zach wants to fly jets for the navy to prove himself to his father but the road ahead is a tough one. He and his fellow recruit and friend Sid (Ian McIntosh) join six more hopefuls (including a plucky female, Seegar, played well by Keisha Atwell), to be put through their exhausting paces by the harshly demanding bully of a drill sergeant Foley (played by Ray Shell, who expertly unleashed himself into the role and loved it). Foley’s method for transforming a rabble of misfits into officers (and gentlemen) shows him as a caricature of every American loud-mouthed, verbally abusive and threatening drill sergeant we’ve ever seen in American war films.

Next to the training base is a paper-packing factory where downtrodden, badly paid female workers with no job security or job satisfaction pass endless days in dead-end, boring monotony, where standing up for themselves would bring instant dismissal.

Enter Paula (Emma Williams) and her friend Lynette (Jessica Fomeroy), longing to escape their existence – but in different ways. Paula idealistically wants to meet interesting people, improve herself and become a nurse. Lynette has her sights set firmly on attracting and marrying an officer from the base who would fulfil her dreams by taking her away from her unenviable work and poverty-stricken home life to a world of travel and excitement. She makes a bee-line for the hapless Sid. Zack, Sid and the two girls Paula and Lynette create the love interest, and along with Foley, and a strong performance by Paula’s mother (Rachel Stanley) form the mainstay of the production.

We have a musical packed with a military backpack of just about everything.  Rough tearaway recruits. Humorous one-liners (look out for them).  The desire to escape working class boredom and poverty. The love interest from not one but two couples.

And as the training progresses and officer-hood looms tantalisingly, so does Foley’s humanity reveal itself.

I was worried about the cast unrealistically bursting into song would seem out of place but was pleasantly surprised at how seamlessly the songs fitted in.  We have It’s a Man’s Man’s World sung by the factory women (and in their world in that era it was indeed so). This was followed by Girls Just Wanna Have Fun (of course they do).  I Wanna Know What Love is was in-keeping with the emotion of the scene and We Don’t Cry Out Loud sung by Paula and her mother was poignant and moving advice from a mother who had made mistakes herself.

The delivery of the familiar numbers was impressive but I was disappointed by the Hippodrome’s acoustics especially in the first half – the music accompaniment was so dramatically, overpoweringly loud that it drowned out most of the words from a cast who had learnt all their songs and delivered them with gusto. Many of us just couldn’t hear what they were singing about, and we relied on our memories. This had improved by the second half. 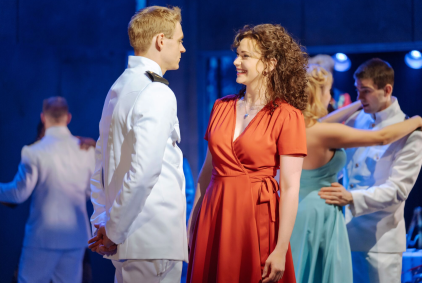 The drab, industrial set design of grey concrete slabs and a rusty military metal staircase prop for the gruelling training scenes contrasted perfectly with the brighter hotel scenes where the happiness of love, romance and fun is accompanied by a backdrop video of unfurling waves on a long, empty, beautiful beach. Video accompaniment was much used and worked well.

Costumes are fitting for the period – 80’s dungarees, cord jacket, gym clothes are baggy jersey trousers and vest tops. And those white officer uniforms we’d waited for – whose heart isn’t beating a little faster when confronted by a line of handsome young military pilots in full whites, hats and all …and as we had witnessed them getting dressed we know even their underwear matches.

The musical doesn’t set out to make a political or economic statement – its primary aim is to deliver the possibility of bettering oneself, and as such it offers us as well as the characters fun and escapism – and of course those well-loved 80’s songs.

And the finale? The scene we’d waited two-and-a-half hours for?  It definitely didn’t disappoint. The Hippodrome audience buzzed in anticipation, we knew what was coming, and suddenly clapped, smiled, and laughed indulgently, remembering why we went. The future is optimistic and beautiful. Oh the thrilling romance of the moment. Oh the corny but wonderful excitement and we loved it. Yes it was indeed worth it.

Be prepared – as Paula was – to be swept off your feet.  As you hoped you would be.